Announcement: I’m constantly trying to improve the quality of the elementary weekly news post, but I need some help. Let me know, whether you can provide productive feedback, check the posts in terms of spelling and grammar before they’re published or either provide an interesting topic. My preferred way to communicate is Google+, link below.

One week ago, Jochen Breuer announced the reintroduction of a famous website, isfreyareleasedyet.com. The concept is very simple, yet addicting. A counter shows the number of remaining bugs for the next preview release of elementary OS Freya with Launchpad as the source. Just bookmark the site, probably on your phone too and you can check out the progress easily everywhere you are.

Earlier today Daniel Foré, one of the heads of the elementary project, introduced the possibility to donate on a monthly base with a new website powered by “Patreon”. Supporters can become “patrons” and donate a specified amount of money automatically every month. For now, last problems had to be cleaned up he says with his Google+ post, but in an undefined period of time, as soon as enough patrons are found, they even want to hire developers.

Looking for the tip of the week? Submit yours if you want. 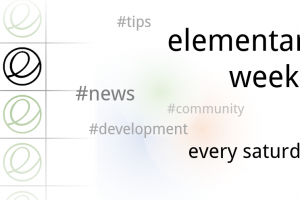